Meaningful Banters: "He Dumped Me!" (A Real-Life Post-Solas Discussion)

I just met a wonderful new man. He's fictional... but you can't have everything.
—The Purple Rose of Cairo 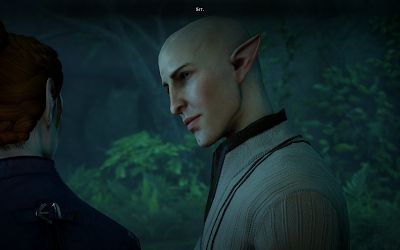 What do you do after a certain unexpected and earth-shaking relationship status change in Dragon Age: Inquisition?

Yeah. You know. That moment after Solas dumps you.

Did you take the option to call him an asshole? Or did you shrug? Cry? Yell banal’abelas, banal’vhenan? Or did you nod understandingly while calmly waiting for him to work out his internal bullshit? If so, you're a far better person than my poor Inky, who in my own internal headcanon went off to get schnockered at The Herald's Rest for a week and who then filled all Solas's favorite wine bottles with tea.

I didn't take it so well either. In a weak moment, I called a gamer friend, Kimberley, to admit the depths of my outrage. And she's never let me forget it.

I'd really loved Bull's romance previously, but okay, I admit it, my crush on Solas was even worse—pixellated or not, I'd definitely found myself gazing at him more than once with little hearts in my eyes. For this reason, writing my latest analyses on Solas's romance has been even more fun than usual, but reliving its humiliation and fabulousness also made me think again about how oddly emotional these game moments can be.

Case in point... Exhibit A.

I pause the game. Click a number on my phone. 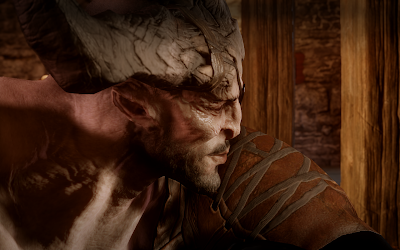 Kimberley: Oh. Right. Pretty cool. I remember now. Even if that was a total spoiler though.
Me: Yeah, it is cool. And sorry again that I spoiled you. I was just really excited when I found out.
Kimberley: I get it.
Me: Thanks.
Kimberley: But... didn't you already know that was gonna happen?
Me: Him dumping me? Um, I mean, my Inquisitor? NO, I DID NOT.
Kimberley: But I thought you played it before.
Me: I did, but I romanced Bull.
Kimberley: Oh, right! The one with the... um... safe word?
Me (cough): Yeah.
Kimberley: Woof.

Side Note: At this point in time, Kimberley hasn't yet played DAI or romanced Bull, but she's heard my vague if delighted descriptions of his romance. So we both pause for a respectful mental time-out.

Me: It just seems unfair. You'd think the fictional boyfriends are the ones who'll be supportive. Not dump you suddenly in the middle of a swamp. I mean, I get enough of that in real life! It's not right.
Kimberley: Since when have you been dumped in the middle of a swamp?
Me: Okay, so I'm exaggerating. But then he just leaves you there!
Kimberley: In the swamp?
Me: Yeah. I mean, it's not like they have Ubers in Thedas. 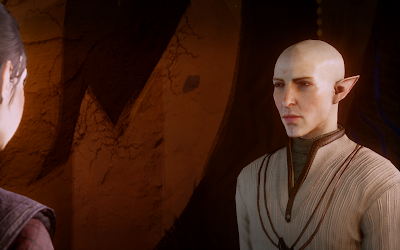 Meanwhile, in my imagination, Solas is choosing this moment to change his Facebook status from "In a relationship" to "Single."

Kimberley: So... you're actually kind of pissed about this, aren't you?
Me: Huh? No. Um. It just caught me off guard.
Kimberley: Because you honestly really sound upset.
Me: THEY DIDN'T EVEN SLEEP TOGETHER.
Kimberley: Ouch.
Me: See? I know, right?
Kimberley: I don't care if he's fictional, that's gotta hurt.
Me: AND HE WON'T EVEN TALK TO ME ABOUT IT!

An audible sniffle escapes me and I reach frantically for a tissue. I am now mentally throwing fireballs at Solas. I am not okay.

Kimberley: Wait. You sound funny. Have you been crying?
Me: No.
Kimberley: Oh shit. You have. You totally cried.
Me: Oh, boo-hoo, lucky guess... Besides, I cry at everything. I'm a crier. Books. Movies. Commercials. Disney ballads. YouTube videos. Pets. Sappy pop songs.
Kimberley: Fictional boyfriends...
Me: You weren't there!
Kimberley: Angela... Neither were you!
Me: Okay, I know, I know, but... seriously, it's surprisingly emotional.
Kimberley: You're too sensitive. You need to play more zombie stuff.  It's cathartic. And you don't get relationship crap.
Me:  It's not my fault! It's Bioware! They're evil! It's WHAT THEY DO.
Kimberley: You cried. Over a fake boyfriend in a video game. I'm blackmailing you about this forever. This is hilarious.
Me: It's not hilarious. If Garrus had dumped your FemShep you totally would have cried.
Kimberley (smugly): Garrus would never do that to me.
Me: If I killed you with the power of my mind right now, no jury would convict me.
Kimberley: No jury in... where is it again?
Me: THEDAS.
Kimberley: Sorry. I'll be serious. I really do want to be supportive.
Me: Thanks.
Kimberley: So. Can you kick his ass, at least?
Me: Huh. No. I don't think so.
Kimberley: Awww...
Me: What is it?
Kimberley: You can't. You can't do it.
Me: Shut up.
Kimberley: YOU STILL LOVE HIM, don't you?
Me: Oops, look at the time! I... Yeah. GOTTA GO.
Kimberley: Coward.
Me: Someday, you'll play Dragon Age: Inquisition. And you'll romance Solas. And on that day, you will FINALLY understand my pain.
Kimberley: No, I won't.
Me: Why?
Kimberley: Because I'm gonna romance Bull.** 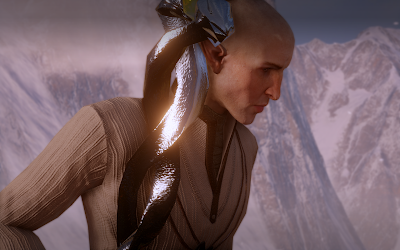 Sigh. True story. And in all seriousness there is this small part of my brain that's still waiting for some kind of resolution there. I can laugh about it (and often do), but there's a reason many of us nevertheless wince a little when we call this emotional state Solavellan Hell.

I mean... sometimes, if a game is good enough, this stuff sure feels emotionally real. That's part of the fun of it, oddly enough.

Another fun aspect to all the suffering is that if I ever want consolation on this, I've got it in spades. Because I am not alone. Thousands of other gamers all over the world have also romanced my commitment-phobic, lonely elven god boyfriend. So we're all kind of supportive and sweet to each other when we hang out on social media or post in groups or message boards. It's pretty funny, as if we all have the same ex, but minus the residual jealousy or weirdness.

And it's the same with almost all of us, I notice. We start out by saying "My Inquisitor" did this, or "My Warden" did that, but you know what happens every time? The first person sneaks in—lord knows, you've had to have noticed it here on my blog, since I do it constantly. The shift is almost imperceptible for me at this point—from "she did this," or "he did that," to "I did this" or "I did that." Because yes, you're building a character when you play these RPGs, but the Dragon Age team in creating them, and especially in the case of Inquisition, also thoroughly understands that you're additionally invested on a powerful and personal level that may surprise you (it always does me), and bam, at certain, sneaky moments, you'll almost certainly find your heart engaged, as well as your imagination and intellect.

Or when you romance Solas.

While it's not always exactly a barrel of laughs, as an emotional experience in Dragon Age, Solas's romance is, for me, unparalleled. And that's even before you factor in the ornate and poetic language, or the surging melancholy strings of Trevor Morris's gorgeous and cinematic soundtrack, or Gareth David-Lloyd and Alix Wilton Regan's beautiful voices, or the haunting and lovely character design, or the breathtaking and sorrowful backdrops of Thedas.