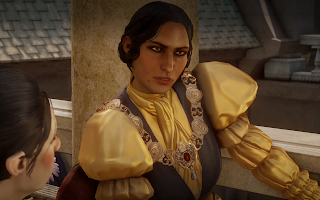 Hello all you amazing Thedosians! Thanks to our wonderful friends at BioWare, we've gotten some fabulous responses to the incredibly silly list of questions I sent over to them for 2020. We're so proud that this is our third consecutive year for #DragonAgeDay, and this year we're raising money and awareness for the NAACP Legal Defense Fund!

Sylvia Feketekuty is a brilliant writer on the BioWare team, and she was nice enough to respond to my silly questions list with the following wonderful and whimsical answers!

ME: Sylvia, you wake up with the Anchor/Mark. What do you do?

What's your personal canon/favorite race and class in Dragon Age?

I prefer mages in RPGs. That said, when I was playing through my content during DA:I’s development, I created a dwarf warrior just to change things up. I’d like to replay Inquisition as my standard female human mage one day, maybe just before the game I’m working on now releases. I think that could be fun.

Which demon would show up to tempt you at your personal Harrowing?

This is tough! Fear, sloth, despair? All good candidates.

Who's your favorite Dragon Age villain and why?

Probably one of the ones I’m working on now.

As Josephine’s writer, she’ll always be my favorite!

You get beamed to Thedas: What's your job--and would you survive?

If I can read the language: time to be a Chantry clerk! My survival probably depends on whether a fresh disaster is rolling across Thedas or not.

Your literary read of the day: Swords and Shields, Hard in Hightown, or The Randy Dowager?

Crystal Grace. The bellflowers are beautiful.

The harts, because I was not prepared for the sound they make when I first tried them out.

Last but not least... what are your feelings on Plaidweave?

And now, for a few more serious questions! What was your role (or roles) in working on the Dragon Age games?

I’ve been a writer at BioWare for eleven years now, but Inquisition was my first Dragon Age game. When I came on, I remember a whiteboard with quick descriptions of the core cast. “Diplomat?” was scribbled under the advisors. Our lead writer at the time, David Gaider, told me I could pitch that character, and that was the start of Josephine.

I was also the writer on three wildernesses, developing quests with the level designers for Crestwood, the Fallow Mire, and the Hissing Wastes. For our critical path story, I wrote “Champions of the Just” (though most of Abernache was Luke Kristjanson) and “What Pride Had Wrought” (though Dave did some of the conversations inside the temple). And I was also one of the writers on Jaws of Hakkon and Trespasser.

What does increasing inclusivity and diversity in the games industry mean to you?

For anyone who wants to make a game to be able to do so in safe, supportive environment. That’s a pretty broad statement, but I think removing extra hurdles and bad practices is the only way forward.

Who or what inspired you to work in the games industry?

Playing games as a kid. They were these weird, wonderful worlds you had to explore on their own terms. That’s still very special. The magic’s never left.

What was a favorite team or collaboration moment for you?

I wasn’t positive we could get a sword duel for Josephine’s romance. Then her cine designer, Richard Boisvert, arranged for motion capture of people dueling and was able to craft the scene. I was amazed, and still am, he figured out a way.

Another favorite collaboration was developing Crestwood with level designer Raylene Deck. Because we had a dungeon available, we were able to tie it into the Fade Rift in the lake and the dam and the overall story of the area. I was really pleased with that, because I’d always wanted to write an old-fashioned dungeon jaunt.

Is there anything we haven't asked that you always wished someone would ask about working on Dragon Age?

Good question! Probably “what little-seen people or places in the Dragon Age universe would you like to explore?” Which is a tease, because that’s exactly what I’m doing now at work. One day!

Last but not least: What was your most inspiring moment in 2020, if you feel like sharing it?

It’s not one single moment, but I’m grateful every day for my friends for keeping in touch, playing games with me over the internet, and generally helping me through.

Thank you to Sylvia for sharing her thoughts with us! And HAPPY DRAGON AGE DAY!