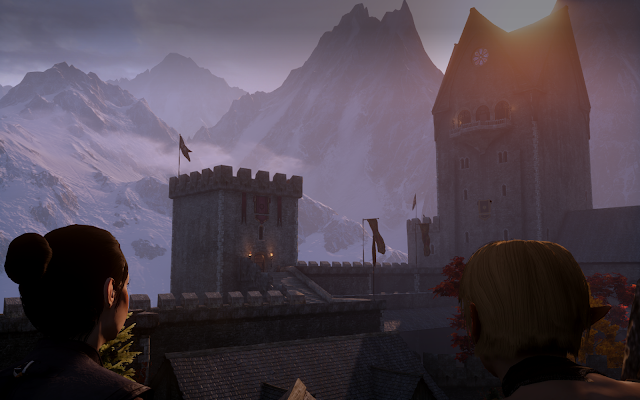 Like most of us, I'm a sucker for music. And I was recently sharing Solas Spotify playlists with my friend and fellow Dragon Age Day founder T, and it made me want to do one for ALL the Companions!

So here we are—just for fun, I created playlists for all of our Dragon Age Inquisition Companions, below, plus (of course) Leliana, Cullen and Josie.

My criteria for these was pretty loose, more about mood and gut reactions. In terms of what the songs mean for the characters, some of my choices are about the dark choices we might make, and what happens then (cough, Bull).

Others are about when everything goes absolutely right. Some songs are about the delights of that character's romance, while others are about how that romance may unfortunately be delicious agony.

One thing I deliberately didn't do—I didn't go back and look at that BioWare playlist blog post from years back. I remember that I loved it, but I didn't want to be an echo chamber, so I just did my own stuff here.

You will hear the occasional show tune. Or the occasional film composition. Or something just plain weird. Sorry/not sorry! There are also some very NSFW selections on some lists—especially Bull's—so you may want to browse and listen privately first in those cases.

Thanks for checking these out, and I'll look forward to your thoughts! What did I miss that was so bloody obvious you can't believe it? What songs mean the most to you when it comes to certain characters?

A playlist for everyone's most loved/hated hobo apostate and occasional elven god.

Hidden gems you may not be familiar with? I'd pick "We Raise Our Cups," which I love in this context for its sense of regret and myth, and the quietly apocalyptic "Keep Breathing," which feels SO "Drop-the-Veil-like" to me ("People are dying, I close my blinds...") "Leave Like That," and "Wasteland, Baby!" I tried to go for a combination of snapshots here, not just "Oh my God you left me," although that is of course REALLY EASY TO DO HERE (darn it, Solas). Since Solas actually does have a sly sense of humor, I also wanted to have a little fun occasionally, so there are some dashes of humor, like "You're Welcome," which, come on. That's perfect.

A playlist for the Ben-Hassrath in everyone's life. Please listen responsibly and don't forget your safe words...

My picks for hidden gems here would include "Bad Reputation" (the song sounds like an anthem to love but it's also about damage and despair—"been breaking down, do you want me now, do you want me now?"), "The Bagman's Gambit" ("they'll never catch me now," goes the refrain, but we know everyone gets caught in the end), Daniel Lanois's gorgeous, epically romantic "The Messenger," "Master and Servant" (cough), and "Your Love Could Start a War." Is there a subtext in this playlist? Beyond the obvious nods to sexy times, it's basically that Bull is a lying liar whose lies are alternatively cheerful, methodical, or chilling, a stone-hearted spy depending on your choices, and, well, traumatized. He's also trapped for a lot of Inquisition—somebody who's stuck in a political machine it's hard to get out of, so I wanted to push that here. He's also a sweetheart to either Dorian or a romanced Inky despite the rough edges, so you get that here too.

A Dragon Age playlist for handsome templars and those who love them. (Wait, that wasn't flirting, was it?!)

Some potential hidden gems would include "Dogs of War," "On Every Street," "All the King's Horses" and "Anthem, Pt. 2." I really enjoyed putting this one together and tried to include everything from the PTSD, to his addiction issues, to finding true love, to occasional dashes of humor ("Don't Flirt with Me"). There's a little more movie soundtrack stuff on Cullen's than on some of the others, and I loved "Little Lion Man" to kick it off.

A playlist for a certain handsome Tevinter mage who may or may not be in love, but who is always devastatingly charming.

Potential hidden gems here for me would include "The Last High" (the progression of the narrator's arrogance is quietly hilarious as the song goes along), "The Wanting Comes in Waves" (yes, I am a huge Decemberists fan, and this one is probably my all-time favorite), "Dorian," "Exile Vilify," and Mika's beautiful "Any Other World." My goal with this one was to balance Dorian's intelligence and vanity with his hidden pain, yearning, kindness, and sweetness.

A playlist for lonely guilt-soaked Grey Warden warriors and bearded icons (THERE CAN ONLY BE ONE).

My picks for some hidden gems here would include Johnny Cash's terrific cover of Sting's "I Hung My Head," "Forgive Me Friend," "Samson," "Could Have Been Me," and "The Trapeze Swinger." Blackwall's list was one of the easier ones because of his palpable sense of regret and unworthiness (hey, there are thousands of songs out there about how much people hate themselves), but I also tried to incorporate some moments of purity, courage, redemption, and happiness.

A playlist for sweet spirit boys and real boys alike that will lift your spirits even if it doesn't lift your feet.

Some of my personal picks for hidden or less-known gems here would include "Bright Eyes," "The Wind," "Compassion," "Everything Old is New Again," "Lullaby for Cain," and "On the Nature of Daylight." I hopefully walked the line here between innocence and sweetness and Cole's bigger sense of knowing -- I was trying for his sense of the cosmic. I definitely didn't want to infantilize Cole, but he is sometimes paradoxically truly a kid, and I did want to include those dashes of childlike wonder at humanity's quirks.

A playlist for the secret warrior princess in all of us (with a dash of SWORDS AND SHIELDS).

Some less-known gems here might include "Sand and Water" (a gorgeous examination of grief, and one I wanted to evoke both Cass's brother and her loss of Regalyan), "Kingdom Fall," "Disgusted" (oof!),  "Juliet," "Graveyard," and Joan Osborne's joyous anthem "Righteous Love." Basically, I just wanted to salute a kickass woman with hearts on her armor and in her soul.

Shite! A playlist for Red Jennies, kickass girl archers and their girlfriends. BEES!

Some hidden gems here might include "Mayhem," "Eat the Rich," "Suzanne," "Broken Arrow," "Syrup & Honey," and "The Dresses Song." I had so much fun with Sera's list, although I wish there were more songs about bees, dammit.

Well, shit. A playlist for the dwarves and dreamers,  as well as those still hung up on all the wrong people...

Some lesser-known inclusions here are "Hero" (one of my absolute favorite songs lifelong), "She's Already Made Up Her Mind," "This is Hell," "Stories," and "Happy Ending." Obviously the ghost of Bianca is all over this playlist (poor Varric), but it was really fun to explore—I love "I Know I Know I Know" in that context, as well as "Happy Ending," not to mention "Innocent When You Dream," which for me is perfect for Varric's intelligence and warmth.

A wicked little playlist for the most fabulous mage you'll ever meet, darlings.

Stuff you may not have heard before could include "A Little Wicked," Scarlett Johansson's wonderful, slinky "Trust in Me," "The Silent Treatment," "The Red Shoes" (I'm a sucker for fairytales), and "Your Soul." Viv's not bad, she's just drawn that way.

Some fun less-known stuff here includes "Nun with a Motherf*&*ing Gun," "Dante's Prayer," "All My Heroes," and "The Maker Makes." The combination of stone-cold killer and true believer in Leliana's list (with a dash of girl power) is really fascinating to listen to.

A playlist for the world's sweetest bard. Some of her dolls act out these songs when she plays them.

Hidden gems here might include "All Will Be Well," "Josephine," "Mermaid Song," "I Was Brought to My Senses," and "The Lucky One." I felt sort of hijacked on this one because I had to keep putting in Disney songs, and that's all there was to it. They had to be here. Josie's a Disney Princess at heart!