From Alistair to Cullen: Fairytale Romances and Dragon Age 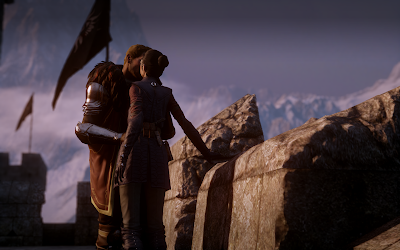 Cullen: The way that I saw mages... I'm not sure I would have cared about you. And the thought of that sickens me.

I heard someone say recently that RPG romances actually elicit the same reactions in the brain that real romances do. I have no idea if that's scientifically true, but when it comes to Dragon Age, it certainly feels true.

For me, as for many, RPGs tap into emotions that can be intriguingly close to real. We play a character for what can be dozens or even hundreds of hours. We flirt with other characters. They flirt back. And eventually declare their love. We love them back. And often, not just via avatar—it's not just my Inquisitor, for instance, who loves Solas, or Bull, or Zevran, or Anders, and all my other romanced characters. I absolutely love them, too. And in a way that's more personal and less remote than, say, my crush on Aragorn when rereading The Lord of the Rings. Because let's face it, Aragorn doesn't look right over at me and proclaim his adoration back. In an RPG romance, however? Yeah, he totally would.

And that's where they get you.

It's both embarrassing yet visceral, how emotional that can be. And each choice in an RPG like Dragon Age further ensures that our choices will make us unique, make US worth the love and accolades from our chosen objects. No matter that thousands of other people have lived it—you can know this intellectually, yet emotionally, the game relationships still feel all too real, immediate, and personal. It's one of the greatest lures of the gaming world, that sense that YOUR playthrough is the only one that truly matters, and it's intoxicating when accomplished by a team as talented as Bioware, for instance, on the Dragon Age series.

However, when you've played your share of RPGs, as I have, you can also kind of get jaded; lulled into certain patterns. You especially become used to the romances going a certain way—you flirt with your potential love interests, they're charmed, bold or bashful, and they flirt back. If you're playing a good (or "paragon") character, you won't break their hearts and they won't break yours. There's not a ton of suspense—they will love you. It's assured.

You then progress through the game story, and eventually there are heart-eyes and kissage, followed eventually by a scene where you finally spend the night together in pixellated soulmate bliss. Well, hey, for a moment or two.

And, well, basically, that's it. You got your happy ending, or, alternatively, basically, what I call, the phase that is "Welcome to the End of Your RPG Romance."

First off, there can be something really reassuring about the less complicated romances. They can be terrific fun, and a welcome change from real life.

The base template for me on this in Dragon Age, for instance, will probably always be Alistair's romance in Dragon Age: Origins, at least, as I had played it. I'd ended up with a triumphant female elf Warden wandering off hand in hand with a Grey Warden Alistair after defeating the Archdemon and waving goodbye to a pregnant Morrigan. (Note: You can get an even happier ending if you played a female human noble, because then you can marry Alistair, he becomes King, and you ascend the throne alongside him to become his queen.)

I'd liked the Alistair romance, although it hadn't quite been my cup of tea. It had seemed a little vanilla and predictable, to me, even though it was (being Bioware) also indisputably charming. Alistair is a funny, sweet guy, he's an exiled prince who gives a female Warden his inexperienced and vulnerable heart, and it's all seriously adorable. The moment when he gave my poor sweet Warden a rose remains a milestone for me in my memory of my first DAO playthrough.

Alistair's romance isn't predictable, though. That's where I was wrong. It can end in half a dozen different brutal and tragic ways. So I was truly amused later to realize how many different choices I'd actually happened to luck into that had resulted in that bright and sunny fairytale ending!

I mean, come on, this is Bioware. I was stupid. Sunny endings, I should have remembered, are... rare and precious. Never a given.

But I was careless, and had innocently assumed my Disney outcome was the norm. (Really? Was I ever that young? Evidently I was. Once.)

But my entire awareness of that moment (and happy ending) was actually a lie, and, as I've noted, it wasn't the only possibility at all. Ironically, Alistair's romance most definitely isn't happy-happy. It isn't "someday my prince will come." It can, in fact, end in incredible bleakness—with the Warden dumped, left, abandoned, or dead, and with Alistair despairing and drunk, executed, or heroically dead from his own fatal blow against the Archdemon.

I'd had no idea of this in my first playthrough. I only began to realize its possibilities in discussions with other Dragon Age players I know.

And I'd definitely had no idea that an Alistair playthrough could be so much more complex and dark. The first time I played Dragon Age: Origins, my Warden had encouraged Alistair not to become King because she wasn't a fan of people being pushed into roles they didn't want, so she inadvertently ensured that they got their happy ending out of simple selfishness. Which was even more ironic because, for me, I didn't actually think my Warden protagonist's romance with Alistair would even last. She'd had conflicting feelings for assassin Zevran (then broke it off because poor Alistair was really difficult to break up with, honestly), and had also had a wordless if doomed yearning for Qunari warrior Sten (at least in my own headcanon).

So I got my "Disney Prince" romance even if at the end I kind of went, "Oh, sweeties... it will never, ever last," to the couple I ended up with.


It's All About the Formula

This fairytale type of formula means that your typical romance often takes up a fraction of the game story, while also hitting those predictable necessary romance points... the courtship, the glances, the kiss, the sex, the aftermath (if there is one). Most formulas in fact eschew the aftermath and just end the relationship there in a haze of assumed present and future bliss. This always disappoints me, because of course, relationships don't end with sex, and they actually get a lot more interesting after that point.


Romances adhering to this formula in Dragon Age might include, depending on story arc, the following characters:

However, of course, this being Bioware, any one of the above romances can end sadly and even tragically as well. It just depends on the choices you make. Alistair, Leliana, and Merrill can all end up abandoned or dead at the hand of the very person who loves them, while Cullen's romance can also end in one of the most heartbreaking revelations in the Trespasser DLC, depending on your choices for him. Josie and Cass survive no matter what, but they may do so with some serious broken hearts.

Thank goodness, though, it doesn't have to go that way. So if you go for the fairytale, and you make the choices that support true love and sweetness, you'll usually get it in the above scenarios. Alistair's, Leliana's and Merrill's romances are more innocent, and Josephine's is positively Disney Princess (and utterly adorable). Cassandra's is lovely, and provides a glimpse of her softer side—my only complaint about hers is that it's a bit light on content, and it's pretty much set forth according to that formula where the story's basically over after the sex.

Cullen's, meanwhile, is probably my favorite of the fairytale romances in Dragon Age, not least because it doesn't end with the hookup, but instead actually explores Cullen's journey across the entire trilogy. It's especially satisfying if you romance him with a mage, since Cullen's story back in Dragon Age: Origins began with a traumatic experience that left him with a bias that he was still working through even in Dragon Age II and on into Dragon Age: Inquisition.

In DAI, Cullen is therefore wrestling with a search for redemption based on over a decade of backstory if we've played the entire trilogy. His emotional inner conflicts result in a romanced relationship with the Inquisitor that can be really rich and poignant, as his feelings for her are depicted in a lovely and often wordless progression of simple, believable little moments (both funny and sexy) that genuinely communicate intimacy. As his romance evolves, we're shown Cullen's more vulnerable side, as well as how deep his sense of religious faith really is. I remember being surprised and moved at a simple scene near the end in which Cullen simply embraced the Inquisitor and held her, expressing for the first time how deeply he feared losing her.

There are plenty of other happy romances in Dragon Age, but they're not as straightforward. These romances, however, meet the basic needs of the formula and provide a general prospect of romantic happiness for those who make the right choices.

If you want hearts and flowers, in other words? These romances are a good place to start.

Meanwhile, next up, I'll take a look at some of the romances that don't really follow that fairytale formula... and which ones in that assortment that I loved most.

What about you? Do you prefer the fairytale romance formula, yourself? Who was your favorite romance, if so?