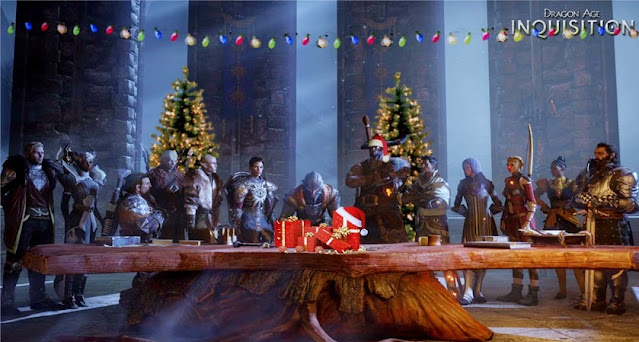 Just a silly little confection, hug, and thank you to you Dragon Age friends who have made my life so rich and meaningful, especially in one of the toughest years of my life (and, I know, so many of our lives).

Note 1: I have been schooled that I should have used Satinalia, not Wintersend here, but I still think "Wintersend" sounds better. Oops! Oh well.)

Note 2: I've broken up the poem thematically if clunkily, so it's easier to read—it's just meant to be a fun exercise so I'm totally not keeping things formal, here...

'Twas the night before Wintersend, and all through the Keep

Not a creature was stirring, all Skyhold asleep!

A stillness and silence filled all Herald's Rest

While up in the Rookery ravens did nest

Both mages and templars were snug in their beds,

As gingerbread Fade spirits danced in their heads

Meanwhile, up in my quarters, in halla PJ's

I'd just gone to bed for the first time in days,

When out on the steps there arose such a clatter,

I sprang from my Free Marches bed -- "What's the matter?"

Then I ran to my balcony quick as a dance

The moon on the battlements shone with a glow

Gave the luster of Veil-Fire to objects below

When, what to my wondering eyes should appear,

But a dragon and sleigh, it was actually here!

As it circled, it changed, and then oh, Maker's Breath,

I knew in a heartbeat that this was Flemeth!

More regal than gods with her Hair Horns of Awesome

Her armor with touches of Arlathan blossom

Get you up Leliana, and Josie, and Cullen

I bring Wintersend cheer, so you'd best not look sullen!

And oh come all ye Chargers, and Maryden, too!

Sutherland and Scout Jim, come away from your stalking

I've got trinkets galore, so you better get walking!

But I won't wait forever, I've got things to do!

I just thought that I'd stop with a present or two.

So come down now to greet me or off I will fly!"

And so downstairs we tumbled, with our hair all awry.

And there in the courtyard, she stood with her sleigh

With a big bag of presents, at least twelve feet tall

She handed them round to us, Chargers and all!

There were goodies and treats and delectable things

And funny gifts too, like small toy nugs with wings

There was cocoa for Bull, and a dragon-tooth pile

That was perfect for weapons or one kadan's smile

There were kittens for Cole and a hat even wider

Plus a fine quill for Varric and a barrel of cider

A beard kit made Blackwall give Flemeth a blush

As he'd never seen anything nearly as plush

A new Swords and Shields to thrill Cass with each word

For Dorian, some fine ancient tomes of enchantment

To inspire him to further magical advancement

There were new paints for Solas in colors divine

There were bangles and lutestrings and slippers for Leli

And tea cakes for Josie with Antivan jelly

There were potions for Inky and salve for the Mark

And an elfroot bouquet for when times got too dark

Then for Cullen a how-to on quick roof repair

And a silverite brooch for one Madame de Fer

For Lace Harding some beautiful blooms to bemuse

And bright armor for Sutherland's personal use

For gruff Cabot some barrels of Orlesian mead

There were new raven cages for Plucky's elites

Plus a barrel of mint to make cats play with zeal

And cheese to give mice a more sumptuous meal

The bag it was endless and obviously magical

Filled with fine gifts and not one of them tragical

For Skyhold's found family it was a delight

Filled with comfort and joy (and no plaidweave in sight!)

And then giving a nod and a wink from her eye

Flemeth leaped to the sleigh and then took to the sky

The Skyholders all cheered as the Witch took a lap

Round the battlements high where the brave banners flap

Observed Dorian, "The magisters had up their sleeves

Rare spells such as Flemeth has shown us this eve."

Yet as the sleigh vanished ('twas just before twelve, then)

She called back, "It is not Tevinter, but elven."

And cry, "Happy Wintersend!" and ar lath ma to you all!